BURBANK, Calif.–(BUSINESS WIRE)–#CarlsJr–Warner Bros. Pictures has attracted a broad array of brand-leading promotional partners in support of New Line Cinema’s “IT Chapter Two,” an unheard-of phenomenon and a first for a motion picture in the horror genre. 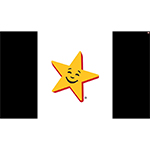 Gene Garlock, Executive Vice President of Worldwide Promotional Partnerships and Alliances, stated, “The fact that we were able to attract such an impressive group of partners speaks to the event status of the film franchise and further highlights how these films have become iconic, must-see experiences on the big screen. Following the huge success of ‘IT,’ the brands joining us were eager to be aligned with such a powerhouse property.”

For the first time ever, Carl’s Jr. will replace its famed Happy Star’s smiling face with none other than…Pennywise. The shape-shifting clown’s visage debuts online today, as part of the Pennywise takeover and “IT Chapter Two” campaign launch at their 1,100 U.S. locations—which also includes four exclusively designed collectable cups, in-restaurant signage and Carl’s Jr. social channels. Crew will be donning co-branded t-shirts throughout the promotion as well. Customers in both the U.S. and Mexico will be able to experience the takeover.

AT&T will support the film through their AT&T THANKS Loyalty Program in the U.S., with a buy-one-get-one movie ticket offer daily for multiple weeks throughout September via Fandango. The app will also offer members a chance to attend one of ten advance screenings in top markets. The program will also be expanded through the social media platforms Facebook, Twitter, and Instagram; through direct mail and mobile service; and by re-skin on the app’s “TickIT Twosdays.”

National CineMedia (NCM) will offer moviegoers an exclusive augmented reality experience through Noovie Arcade—the nation’s only big-screen AR platform and revolutionary companion app for NCM’s Noovie pre-show—bringing them into the virtual world of “IT Chapter Two.” The in-theater campaign includes AR-enhanced content running across approximately 10,000+ screens in 800+ theaters. The partner will also host multiple sweepstakes online and on social media, with a chance to win film-themed prizes.

In support of the film, Pop Secret®, a staple for movie nights around the country, will run an on-packaging sweepstakes program wherever the product is sold in the U.S. The tasty treat will also be served up at various Warner Bros.-hosted activations, such as the sold-out flagship The IT Experience: Chapter Two in Hollywood. Support will also be provided online and via social media.

Through the nationwide loyalty program Fuel Rewards®, and in partnership with Atom Tickets, Shell has revved up a special ticketing offer for Fuel Rewards® members with Gold+ Status to see “IT Chapter Two” for a price closer to the amount the young Losers’ Club kids might have paid: $5.00. Shell will support the partnership through member e-blasts and on the Gold+ microsite.

Internationally, support is equally as strong, especially in Mexico, with multiple partners tying into “IT Chapter Two” with unique, integrated campaigns in addition to Carl’s Jr. Partners there include Chinese-owned rideshare app and the world’s leading mobile transportation platform, DiDi, who is activating a paid social campaign to win tickets to the local premiere. They also devised a stunted scavenger hunt, which ended in an immersive, branded experience at a fun house created to reflect the Derry Canal Days fun house in the movie. Postmates, the food delivery app newly arrived in the country, created an “Unhappy Meal” available to customers via a virtual pop-up restaurant decked out with red balloons and a replica of Georgie’s iconic paper boat; they are offering themed prizes and discount codes, and will also host a trivia contest to win premiere tickets. The campaign is all shared via social media and in-app. And finally, Virgin Mobile who, focused on content and entertainment, will reach their strong user base with an online and social media campaign.

The list of international partners continues with one of Canada’s leading coffee store chains, Country Style, with a “turn up to win IT” cup that offers a chance to win prizes, including three grand prize trips to Warner Bros. Studios in Burbank, California. Cold Stone Creamery will create a custom flavor for the release of the film in Brazil, which will be featured in eight locations and allow customers who buy an ice cream to also receive a movie ticket. Orange, one of the largest mobile network operators in Spain, will run an online contest for advance screening tickets and themed merchandise. And Sanrio Puroland in Japan, a popular theme park usually themed with the iconic Hello Kitty, will tie-in to the film with a sweepstakes, as well as film-themed posters and red balloons popping up around the park at night.

Evil resurfaces in Derry—twenty-seven years after the Losers’ Club defeated Pennywise, he has returned to terrorize the town of Derry once more. Director Andy Muschietti reunites the adult Losers in a return to where it all began with “IT Chapter Two.” The film is Muschietti’s follow-up to 2017’s critically acclaimed and massive global box office hit “IT,” which grossed more than $700 million worldwide. Both redefining and transcending the genre, “IT” became part of the cultural zeitgeist.

Muschietti directed “IT Chapter Two” from a screenplay by Gary Dauberman based on the novel IT by Stephen King. Barbara Muschietti, Dan Lin and Roy Lee produced the film, with Richard Brener, Dave Neustadter, Gary Dauberman, Marty Ewing, Seth Grahame-Smith and David Katzenberg serving as the executive producers.

New Line Cinema presents, a Double Dream/Vertigo Entertainment/Rideback Production, an Andy Muschietti film, “IT Chapter Two.” The film is slated for release in theatres and IMAX on September 6, 2019 and will be distributed worldwide by Warner Bros. Pictures. The film has been rated R for disturbing violent content and bloody images throughout, pervasive language, and some crude sexual material.