Fans Around the World Invited to Tune in to Epic Livestream from Pinewood Studios for First Look at New Products for “Star Wars: The Rise of Skywalker,” “The Mandalorian” and “Star Wars Jedi: Fallen Order” 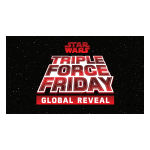 On September 26 at 2 p.m. ET, fans around the world can tune in to the Star Wars YouTube page for a livestream event from Pinewood Studios in London where the upcoming theatrical release “Star Wars: The Rise of Skywalker” was filmed (view teaser here). Via live and recorded vignettes, an ensemble of veteran and new Star Wars talent will reveal new products that will roll out globally for Triple Force Friday on October 4, inspired by a trio of upcoming original Star Wars releases:

Warwick Davis, a prolific actor who’s best known for his roles as ‘Wicket the Ewok’ in “Star Wars: Return of the Jedi” and as ‘Willow Ufgood’ in “Willow,” will host the livestream event at Pinewood Studios. In the U.S., fans and influencers will gather for a special viewing party at Lucasfilm’s headquarters in San Francisco.

As well as seeing new characters like ‘Zorii,’ ‘Jannah,’ ‘The Mandalorian,’ ‘Cal Kestis’ and the new droid ‘D-O’ in product form for the first time, fans will get their first look at the wide array of new products that bring the characters to life in new and unexpected ways, spanning toys, apparel and accessories, books, gaming, tech and home goods.

Force Friday is an anticipated event for Star Wars fans worldwide, commemorating merchandise introduced in advance of the episodic saga films. Past iterations, including a live unboxing event that rolled through 15 cities worldwide in 2015 and a global in-store digital scavenger hunt in 2017, brought out fans around the world who shared their experiences.

As always, fans are invited to join the conversation on social using Triple #ForceFriday, as well as to participate in real-world retail celebrations around the globe. Select retailers in major markets around the world, including flagship Disney store locations in the U.S., will open at midnight on October 4, featuring the new range of products from all three properties as well as a selection of limited-edition commemorative products.

Throughout the weekend, retailers including Target and Toys “R” Us Canada will join in to celebrate Triple Force Friday. On October 4, Amazon Treasure Truck will feature a limited-edition product in select cities — sign up for Treasure Truck alerts so you don’t miss out.

As new plot points are revealed, additional products will continue to roll out leading up to the theatrical release and beyond. More details and updates about Triple Force Friday are available at StarWars.com.

About Disney Parks, Experiences and Products

When Walt Disney opened Disneyland in Anaheim, California on July 17, 1955, he created a unique destination built around storytelling and immersive experiences, ushering in a new era of family entertainment. More than sixty years later, Disney has grown into one of the world’s leading providers of family travel and leisure experiences, with iconic businesses including six resort destinations with 12 theme parks and 52 resorts in the United States, Europe and Asia with approximately 160,000 cast members; a top-rated cruise line with four ships and plans for three more to be completed in 2021, 2022, and 2023; a luxurious family beach resort in Hawaii; a popular vacation ownership program; and an award-winning guided family adventure business. Disney’s global consumer products operations include the world’s leading licensing business; one of the world’s largest children’s print publisher; one of the world’s largest licensors of games across platforms; more than 200 Disney store locations around the world; and the shopDisney e-commerce platform.

Lucasfilm Ltd., a wholly-owned subsidiary of The Walt Disney Company, is a global leader in film, television and digital entertainment production. In addition to its motion-picture and television production, the company’s activities include visual effects and audio post-production, cutting-edge digital animation, interactive entertainment software, and the management of the global merchandising activities for its entertainment properties including the legendary STAR WARS and INDIANA JONES franchises. Lucasfilm Ltd. is headquartered in northern California.

Lucasfilm, the Lucasfilm logo, STAR WARS and related properties are trademarks and/or copyrights, in the United States and other countries, of Lucasfilm Ltd. and/or its affiliates. © & TM Lucasfilm Ltd. All rights reserved.